New: Illustrated Dictionary of French as a Foreign/Second Language 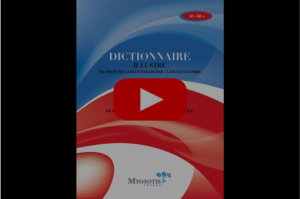 📖 Discover the dictionary with this Flipbook demo:

The Illustrated Dictionary of French as a Foreign/Second Language is intended for young adults and adults whose mother tongue is not French but who have chosen to learn French as a foreign language, second language or host language (francization).

This unique model adopted by the Illustrated Dictionary of French as a Foreign/Second Language is borrowed from the Myosotis dictionary, whose success in Canada confirms the interest in a reference tool focused on learning.

Nowadays, it is rather rare that we still produce original educational tools. However, after analysis, it emerges that we can identify several major unpublished features in this new Illustrated Dictionary of French as a Foreign/Second Language.

Basically, the author did not stop at asking himself, in the form of introspection, what could be the language content that, in his opinion, would be useful for FFL/FSL learners. One of the great strengths of this dictionary is that all entries and example sentences are taken from a body of oral and written documents actually offered to learners, in the form of 32 FFL/FSL textbooks and various DELF preparation resources. No element of the corpus was excluded. The richness of the contexts in which the entries are found testify both to the creativity of the textbook authors and their desire to offer learners diverse models.

Another originality: the work is of truly international quality, attesting to the vitality of the Francophonie today. Thus, the author dared to invite the French of Île-de-France to frequent lexical variants emanating from the various French-speaking populations, without “marking” them with social or regional values. In addition, the inclusion of numerous cultural capsules constitutes an important contribution to the training of learners, at a time when, in language teaching, there is practically no question of pluri- and intercultural perspectives.

Finally, this is a truly educational dictionary. In the treatment of content, several elements of novelty will surprise teachers and learners accustomed to classic dictionaries designed by scholars because the author adopts the point of view of a FFL/FSL teacher. For example, what could be more frustrating for a French beginner than not being able to locate, in a dictionary, simple forms such as sommes or vont? Here, the inflected forms of frequent verbs appear at their entry and refer, of course, to the corresponding infinitive form. Another example: the gender of nouns, a great source of difficulty for FFL/FSL learners, is always indicated by its singular determinants (le, un; la, une), in accordance with current language usage. A third example: an original technique to simplify the spelling of verbs, namely the use of two tables of endings, on the flaps of the cover, simplifies the famous problem of verbal conjugation, while highlighting the regular endings of the vast majority of French verbs.

These few innovative points – there are many others in the author’s introduction – show, in the Illustrated Dictionary of French as a Foreign/Second Language, the importance of adapting the tools of reference to the needs of learners. Does the weight of words in learning a language explain that dictionaries are always… so heavy to carry?

I remember reading somewhere that if we wanted to inflict painful punishment on convicts, it would suffice to force them to write dictionaries! A joke that says a lot about the difficulty of the task carried out by Clément Beaudoin. A book, whatever it is, reveals a great deal of the personality of its author. It took daring courage to undertake this work as a Benedictine, because that is what it is – a long term intellectual work, requiring care and patience. Mission accomplished with panache and originality.